Running OSX in a Virtual Machine under Windows XP - Blasphemy?

Behind me as I sit at my desk, there currently sits an Apple eMac G4. It has only one purpose - testing web pages with a real copy of Safari running on OSX. I realize there's a Safari for Windows now, but I don't trust it to always give me the same results. What I really hate most about it is the size of the thing. I never should have gotten one with a built in screen, but all I can say is that it seemed like a good idea at the time. That was a few years ago.

I've wanted to run OSX in a VMWARE session for a long time. It removes the need to have this bulky thing taking up desk space behind me, and gives me a perfectly valid and portable way to test. Every once in a while I did some searching to see what work has been done to get this to run and until recently hadn't been too impressed. Until now.

This weekend - between running out with fire calls pretty much constantly (more on that later) - I followed the instructions at the OSX86 Project's wiki. That got me about 90% of the way there. Between reading the comments there and doing a lot of experimenting and troubleshooting on my own -- primarily on the networking -- I've managed to get it to work nicely. 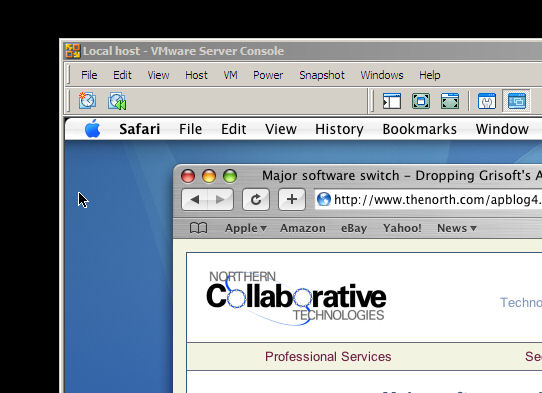 As it stands, I have pretty much full function except sound. Some have reportedly gotten sound working as well, but on this PC I have a cheapo sound card and haven't gone down the path of trying to get OSX to use it yet. The screen shot there shows VMWARE Server (free) running OSX 10.4.8 and within that, Safari viewing my blog.

Now, if you're a real Mac fan-boy you'd hate running this way. Performance is poor as you'd expect and of course the idea of running OSX inside Windows is likely to be blasphemous to you. It does, however, give me a perfectly valid test client for what I need so I'm quite happy with it.

There are  - loading -  comments....
re: Running OSX in a Virtual Machine under Windows XP - Blasphemy?By Declan Lynch on 08/09/2008 at 08:22 PM EDT
Or you could could buy a mac and then run windows inside a VMWare Fusion VM :-)
And while that makes Mac a possibility for the future....By Andrew Pollack on 08/09/2008 at 08:27 PM EDT
...it misses the point that I don't really care for them. Aside from their
expense, there is the intolerable and wholly unearned smugness of the so called
Genius Bar staff, the inability to modify them for the most part, and the
compromise in flexibility traded for the illusion of stability doesn't appeal
to me.

I also hate the windows controls, but I suspect I could do something about that
if I really wanted.
re: And while that makes Mac a possibility for the future....By Eric Mack on 08/09/2008 at 11:32 PM EDT
Have you tried running a Notes R8 client in the Mac VM yet? For me, it would be
great to be able to test basic Notes apps on the Mac.

Thanks for your post
re: And while that makes Mac a possibility for the future....By Jason Hook on 08/10/2008 at 08:42 AM EDT
To be honest I haven't looked back since switching. My all singing all dancing
Windows dual core AMD games machine is gathering dust and I don't miss it.
Personally I'm not losing any flexibility by not using the PC.

That said, Apple's inability to stand behind it's products in the same way the
Dell and others do whilst charging something like double the price is
infuriating. The fact that I'm going to have to buy expensive Applecare adds
insult to injury. Given the expense the machines should come with a three year
warranty.

I like OS X more than I like Windows or other Linux variant but I realise
they're all just tools and all get the job done more or less. I think you are
right that the Mac is developing a kind of cult following it doesn't really
deserve.

On balance I'm happy but dreading having any problems with the machine because
I know there's no on-site or even same day repair and that means I really ought
to keep a spare. Maybe when the next usable Microsoft OS surfaces (or Vista
matures).
re: And while that makes Mac a possibility for the future....By Will T on 08/21/2009 at 01:24 PM EDT
What a well informed post, kudos. I am more of an anti-fan of apple due to the
very cult like following and my business needs as OSX is more play than work
but respect well informed choices.

I know that every company is in the business of making money but some
companies go to far with the level of it. Buy our product and you will be a
better person! You will be one of us and all it takes is a little more money
even though we can give a crap about our customers!
The consumerism and gang mentality (tattoos and bumper stickers is a little
much) of it is such a turn off and a little extreme in Apple's case.

It's sad considering it is what I would recommend to a novice person who
doesn't want to learn a bunch of things to get on the internet or make a video.
At least when you ran linux there was a reason to have some elitist demeanor no
matter how lame it was, I just dont get the I just bought something now i'm
smarter image they dupe people into.

I applaud you on your choice as an individual if only they would be more
focused on customer support and value over customer branding and zealotry. Then
again the pricing may be the reason they are where they are, like who thinks
your cool if you pay 30$ for jeans, now buy some 250$ true religions now your
someone.

re: And while that makes Mac a possibility for the future....By Chris W on 04/15/2009 at 08:42 AM EDT
I just wanted to say that your opinions on Apple service are somewhat correct
but in other regards, completly not true. I purchaced a used MacBook from a
guy in the neighborhood that still had a Applecare coverage. Apparently it had
been roughed up a little and some of the plastic deck around the keyboard had
cracked from the wear. I went online to Apples web site and booked an
appointment at the Genius Bar. At the Bar, I was greeted and told no problem
we can fix it. I said so do I leave it and get it back in a week or two? He
said can you wait 15-30 minutes? I said sure, I'll go to the food court and
eat and come back. Sure enough, it was ready and like new. I never saw Dell,
BestBuy, Circuit City (may they rest in peace) ever ever fix me NOW. Apple
stocks parts for all their machines in every store and CAN service immedeatly
in most cases. Yea they cost more but service IS a huge part of what they do.
I am by no means an amature computer user and have had my share of PCs but
Vitual Box running Winedows on Macs has pretty much finished me for PCs. There
is litteraly nothing I can't run and run fast. I don't game and I think if you
do, stick with PCs. Thats OK! But for the average user, Macs offer a much
better user experince than PCs and thats most of the population.
re: And while that makes Mac a possibility for the future....By OlyComputers on 04/28/2009 at 08:47 PM EDT
You're talking about a little piece of trim that they keep in stock because
they KNOW it's defective. You're also comparing a manufacturers repair center
to a retail store. Of course Bestbuy can't service every laptop on site, but
I'd bet that the old gateway stores kept some common parts in stock. I've
replaced that trim, it's a simple 5-10 minute job (probably less with practice)
and it's a known defect that shows up on almost every 2007 macbook.

Their support is more present, but most of the country does not have access to
an apple store for repairs, there isn't one for an hour in any direction of me
and I live in a state capitol (on the west coast at that). The big problem is
that you can't take it to a third party repair center and expect anything. If
your PC breaks any local computer shop has the replacement parts in stock and
can fix it same day (sometimes standard, sometimes with a repair fee) or you
can have somebody come and do it on-site.

I like apple, but I'm too much of a power user for it. I need customization and
upgrade ability, and I also like to save money wherever possible.
re: And while that makes Mac a possibility for the future....By SlotcarBob on 07/03/2011 at 12:22 PM EDT
Complete and utter nonsense. The terminal in OS X is as powerful as anything
going.

I do think people forget, just because apple is not Microsoft, does not make
them good, I personally think that Google and Apple have every ability to be as
or more evil.
re: Running OSX in a Virtual Machine under Windows XP - Blasphemy?By Curt Carlson on 08/11/2008 at 02:28 PM EDT
If you are just testing for appearance....

Curt
No, need to test for function as well.By Andrew Pollack on 08/11/2008 at 03:06 PM EDT
Lots of web 2.0 stuff -- AJAX, mouseovers, onclick events, etc. all have to be
tested.
re: No, need to test for function as well.By yonas on 08/05/2009 at 07:48 AM EDT
xenocode.com/browsers - cache browsers, and run them - ie6, 7 & 8 side by
side more
VMware server does not support soundBy Todd on 10/27/2009 at 12:15 PM EDT
The reason you couldn't get sound working is because it's not supported by the
free VMware server software. If you want sound and video hardware acceleration
you will have to shell out for VMware Workstation.
re: VMware server does not support soundBy Daniel on 11/16/2009 at 09:27 PM EST
Well, thats not entirely true. You just add the sound card hardware to an
existing vm you need sound in.VMware server is perfect for most vm situations.
re: Running OSX in a Virtual Machine under Windows XP - Blasphemy?By hakim on 12/07/2011 at 01:27 AM EST
could you share the virtual machine if possible,,