We don't get that many structure fires here in Cumberland. I've been to more fires out of town than in. That makes it all the more strange to have Run #1 for 2009 come in as a structure fire -- but that's exactly what happened.

With temperatures hovering at around 0 degrees Fahrenheit ( -17 C for you Europeans reading this) and winds gusting from 5-20 miles an hour it was extremely cold. To make matters worse, the part of town where this home is has no hydrants or town water system. All the water to fight the fire had to be trucked in with a tanker shuttle. Spray from the lines, from fill sites, from fittings -- pretty much anything would freeze as soon as it landed on anything -- including fire firefighters in turnout gear who quickly began to resemble walking snowmen.

Here's the story of it from my vantage point -- somewhat limited, as I wasn't right up front for most of it. At the bottom you can click the thumbnails to see what's left of the house. The garage is entirely gone -- it was fully involved before we arrived. The crews on scene were able to stop the advance of the fire at that point, however, saving at least some of the property and giving the homeowners the opportunity to decide on rebuilding or repairing (I'm betting it will get torn down and replaced). Most important -- nobody was hurt. 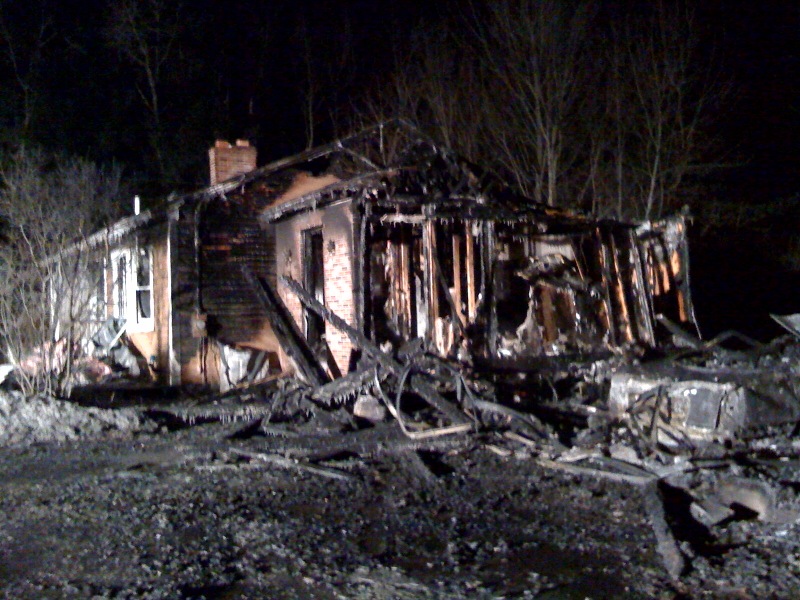 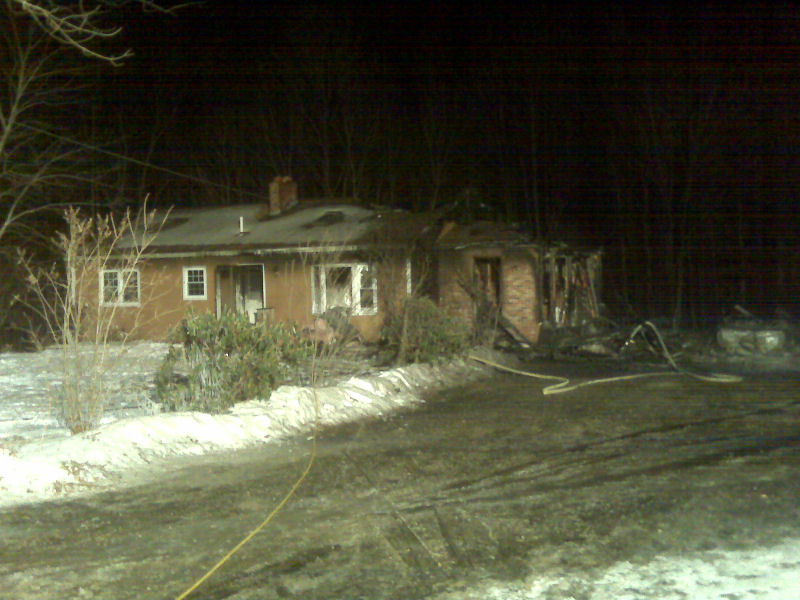 At 1:26am on January 1st, 2009 the pagers went off for a "Desk-Box" - a reported fire in a garage on the west side of town. Cumberland's Engine 2, Engine 3, Engine 5, Ladder 7, and Squad 1 were immediately dispatched along with Falmouth's Tank 4 and Gray Engine 2 (which is also a tanker) and Gray Tower 1. Yarmouth RIT was also called on the box.

Within a few minutes, police on scene reported a fully involved fire in a garage attached to the home by a short enclosed breezeway. The occupants were outside already. Our Chief rolled up fairly quickly and escalated the call to an "All-Hands". That adds more out of town units and moves Cumberland Engine 1 to the West station for coverage. As most of Engine 1's crew had gone ahead on the other trucks already to the scene (crew staffing is always a challenge) I waited with Engine 1 until a North Yarmouth engine showed up to cover our central station. They had enough crew that I was able to borrow one member so that I could head to the West station with at least two men on my Engine.

On the way, our Engine was re-assigned from West station to the water supply shuttle. Engine 1 carries a thousand gallons of water, which is standard for a fire engine, rather than two thousand or more which is what a tanker carries. We also don't have a "Quick Dump" like a tanker. A tanker can pull up to a scene where portable dump tanks are set up (like small above ground swimming pools) and can drop their two thousand gallons in a minute or two and be on their way. An Engine has to pull up, attach a hose line, engage the pump, and pump off its water to the tank. In other words, when it comes to shuttling water we're pretty much in the way as long as their are tankers in line. That means with all the running back and forth, we really only pumped off one load and spent most of the rest of the time parked or waiting.

Even though all the time the truck was stopped we had the pump engaged (pulling the levers for "Tank to Pump" and "Tank Fill" at the same time allows water to circulate from the tank, through the pump, and back to the tank) to keep it flowing under fairly good pressure, it was so cold out that we still had significant freezing on all the ports for connecting lines, on all the drains, etc. Repeat this for all the trucks.

At least one truck is now out of service, and I believe I heard that one of the ones that was there but not being used (manpower had been moved up to the scene, but the truck left at idle) was frozen much as to be considered a block of ice. Remember, these things are just big tanks with pumps on wheels. A thousand gallons of frozen water expands quite a bit. It expands enough to completely destroy a 300,000 dollar fire truck if you're not careful. That's the reason we heat the bays at the fire station.

Clean up form this fire including thawing all the stuff out before it could even be cleaned and put back on. What a mess.

All in all, it was one hell of a stop. The house is still standing, the homeowners can recover at least some of their things, and best of all -- nobody was hurt (not even frostbite).