The big "Mass Casualty Drill" on Saturday. I got to apply some cool tech proof of concepts.

On Saturday, Cumberland Fire Department held a big "Mass Casualty" drill at the fairgrounds. More than 8 months in the planning, we invited dozens of agencies to take part including hazardous materials teams, the Red Cross, rescue departments from several towns, and of course victims volunteers.

The scenario was fairly straightforward. An accident during the fair involving a school bus and a tanker full of gasoline in which the tanker began leaking product all over the place. It could happen. If you'll all take a moment to consult your 2008 ERG and turn to page 128, you'll see that an evacuation of a half mile is called for. That means we had to safely evacuate not just the bus, but also the surrounding neighborhood and the fair itself.

We did not, of course, actually wreck a bus into a tanker full of gasoline. The scene was staged and the road closed. For safety, we even used stairs at the back of the bus to avoid injuring any of our volunteers for real.

Some of the volunteers were given cards indicating "symptoms" resulting from the crash. Coryn, for example, was told to have chest pains. Barb simulated a head injury, and Ari had an injured wrist -- and was "confused" enough that she would keep wandering away from where the triage people put her. She was very good at that. 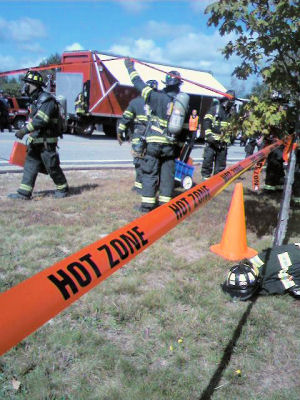 Rescue people practiced triage, fire teams practiced using "Class B" foam to create a safe evacuation path, the Red Cross practiced handling the incoming evacuees (who were bussed to the middle school), and Portland's Hazmat team got to practice doing their work as well.

My crew turnout was excellent, so I got to show off some cool tech stuff. I'm working on what I call an "Instant EOC" (Emergency Operations Center) concept. Saturday's demos were really just proof of concept but the tech worked very well.

At Central Station, an HP desktop machine with a fancy video card powers two monitors. We've all worked that way of course, but this is a bit different. Video "Y" splitters mean that what shows up on one monitor is also displayed on a huge LCD tv behind the podium. The other screen is tied to an In-Focus projector. When you drag a window from one screen to the other, the same effect happens behind you as the window moves from the LCD TV to the overhead. Projecting a map on the overhead -- which can display on the white board -- allows you to live annotate maps.

The cool monitors are one thing, but you need something to display on them. For that, I set up a Domino application with mail-in database capabilities. Anyone on scene could take a camera phone snapshot and send it to a given email address. Within minutes, that scene photo was indexed and added to the rotating display at the EOC -- miles away.

Taking advantage of a command trailer set up by nearby Scarborough Fire Department, I set up a shared meeting space for the on scene incident command post to the EOC back at Central Station. The command trailer has a satellite internet link which proved easily sufficient for screen sharing and white board use. I didn't use Sametime for this. Instead, I used http://vyew.com instead. I've been vocal for a long time in saying that I think this kind of system is a commodity item. Vyew.com really illustrates that. I found it very cheap (free for limited use) , very easy to use, very browser compatibile, and very powerful. Vyew breaks the concept of one-time meeting use as well. Instead, you create "Vyew Books" which are persistent in the same way that a Groove or Team Workspace site might be. The white boarding capability has the concept of multiple pages as well. I really liked this.

The net result of all this was that though far from a true "Instant EOC" -- we were able to demonstrate a very easy to work with use of technology to make incident management much more flexible. We'll keep pushing that envelope. What was most impressive to the people we showed this stuff to was that we built it all out -- including writing the picture management software -- in two days, and still had time to train people on its use.

Other than that, it was a slow weekend. Oh, and yea, I got the snow thrower back together and finished. I'll post about that tomorrow.


There are  - loading -  comments....
re: The big "Mass Casualty Drill" on Saturday. I got to apply some cool tech proof of concepts.By mom on 09/17/2008 at 09:26 PM EDT
One of my fond memories is acting as a wounded passenger in a disaster training
at Sky Harbor airport!

Wondered how you are doing, hadn't seen a new blog or an email. Hope all is
well