Got shell scripts? Get this book.

Its not often I really endorse a computer technology book. In the past I can think of only two textbooks I've ever really felt were so good they exceeded my expectations. This one, "Linux Shell Scripting with Bash" by Ken O. Burtch is the third. 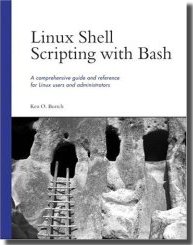 Like Kathy Sierra's "Head First Java", Ken's book is one of those rare finds that you can actually sit down and read in addition to using as a reference.

I've been living in Linux lately -- mostly because it makes a fantastic platform for building applications if you look at the server as a whole rather than just a specific application running on it. Ken's book is a great help to me, as someone who's done scripting in the past mostly by examining other people's scripts.

If you're new to this, understand that while shell scripting isn't unique to the Unix/Linux world by any means -- even old MSDOS hacks like me used batch files -- these shell scripts are much more powerful than what we remember. Shell scripting in Linux (usually using the Bash shell, but not always) is very much a programming language unto itself. It probably would compare favorably with most 'procedural' languages of the past. Loops, arrays, conditional branching, variables, and complex file control and string handling functionality are all part of Bash shell scripting.

Ken O. Burtch does a phenomenal job at deciding what to talk about and how to lay out this complex material in a logical way with an excellent sense of context. That's a tough job in this case because it can be very difficult to separate the scripts themselves from the operating system and from the programs and utilities used by the scripts. I found Ken's choices to be both inclusive and economical in a manner that you'd expect from a good surgeon. He's included the right content from that nearly endless bucket of commands, programs, and environmental considerations and put them together in a concise set of chapters covering everything from the most basic starting point -- what a script is, to complex strategies of security, job control, file management, and networking.

I said earlier that I'd read this book cover to cover. I did that over the course of a weekend. This is only the second of my very large collection of technology books which has held my interest this way. Most of the time, these kinds of books serve as reference works when I need to figure out a specific thing. Ken has done a really big favor for us in that regard as well. At the end of each chapter is a "Reference Section" which lists in a look-up format all the commands, options, and switches he referenced in that chapter.

While not quite the masterpiece of readability that is Kathy Sierra's "Head First Java", the result of Ken's efforts is still very much a must-have reference for Linux users.

Link to Ken's web site
Link to buy this book