Well, we got 15 inches of snow yesterday into this morning. Surprise! The forecast was for 5-9 inches and that was itself unusual for this time of year. This was heavy, wet, "heart-attack" snow that brought down power lines and left cars off the road.

There were 17 call outs in the last 24 hours in Cumberland due to the storm, then this afternoon another very unusual event. About three times a year when the nearby city of Portland has a 3rd Alarm fire (which is an escalation from "Still Box", "Desk Box", "All Hands", and then "Second Alarm") it leaves the entire city with only one engine company unassigned. In those instances, nearby call-volunteer departments send in trucks and crews to staff Portland's stations. Our Ladder 7 and our Heavy Rescue are part of this process. Unfortunately, both the Captain and Lieutenant of our Ladder 7 are full time Portland firefighters, and as such can't very well take Cumberland's truck in. Since the truck must have an officer to go out of town, that falls to me -- the Lieutenant of Cumberland's Engine 1.

This morning, about 10 minutes after sending my first note, I got sent to a call for a Carbon Monoxide detector alarm nearby with our Ladder 7 as its officers were busy dealing with a search and rescue in another part of town. That turned out to be a real issue, and when I arrived on scene with a meter there were over 100ppm of CO all through the house. I was all masked up and breathing bottled air while in the middle of setting up a powerful fan and opening one window at a time when we got the call that Portland had gone to a third alarm. They had a structure fire with a partial collapse. We had to shutdown, pack up, switch out the air bottles and head for Portland (someone else came with portable equipment to finish what we'd started).

This morning's fun also included closing US Route 1 for 45 minutes to all traffic for a power line on fire.

The good news, of course, is that through all the down power lines, cars off the road, CO exposures, and Portland's structure fire and collapse -- nobody was seriously hurt. 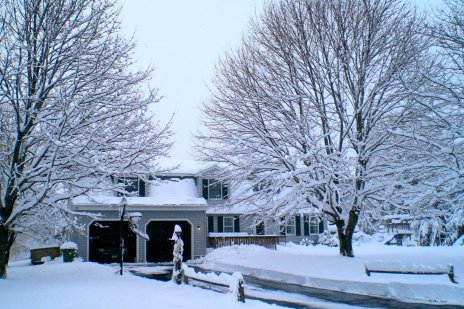