Valuation of productivity measurments as cumulative minutes saved by employees -- do you buy this? 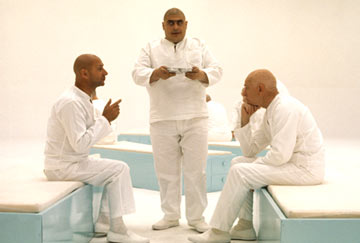 Someone I know was recently talking about a paper that could potentially explain a pretty huge annual savings by saving each of thousands of employees a moment or two each day. I personally don't put much credence in these kinds of savings unless we're talking about people who are essentially a fully utilized resource pool like a call center or production line worker and then only if the time savings happens during their core productive time and not on breaks or as they're getting started. In that case, the activity is largely repetitive and thus any savings is likely to be multiplied a great deal which would save much more than a few moments a day. Further, the savings has to happen at a time when nothing else productive can possibly be happening.

For the rest of us, trying to put a yearly dollar value on say one minute of savings per day seems disingenuous at best. It makes the assumption that every minute you're on the clock is as valuable as every other and that minutes you're not on the clock have no value to the company. These are both fallacious assumptions. Most people are paid their wage based on the overall value they bring to the company over the calendar period the wage is paid. Even the least dedicated employee does not banish all thought of work when not working any more than any of us banishes all thought of home and hobbies when we enter the office.

When the addition was put on my house a few years ago, the work was managed and largely done by two brothers who are in their....late middle ages. At any given moment you'd look at them and wonder how much money you're wasting while they drink coffee and chat with subcontractors and so on. What was really happening was that the experience they bring to the job was so vast that the time spent wasn't being wasted at all -- it was essential to the process. The discussions, which would range from details of the job to home life and kids smoothed things along to such an extent that the when the tools did come out an entire day worth of physical work could happen in just a couple of hours. Their efficiency as well as their apparent inefficiency combined to allow them to do the job the way they enjoyed and the way it made sense to them. As a result, the job was completed on time and the work was phenomenal. In fact, when one of the two brothers was planning to do some stairs, other contractors from the area would come by just to watch how he did it, such is his reputation for that skill. What would the result had been if some efficiency model had been applied and suggested they completely change the things they do? If someone added all that apparent "wasted" time and subtracted that portion from their "cost" of doing the job. I'll tell you what would have happened. The person espousing such nonsense would at best find himself the target of laughter and at worst of a thrown hammer.

Be careful applying fallacious math based on declaration of unproven savings. For me, anyway, it causes me to toss such white papers in the trash as utter fiction.

There are  - loading -  comments....
re: Valuation of productivity measurments as cumulative minutes saved by employees -- do you buy this?By Nathan T. Freeman on 07/15/2007 at 01:09 PM EDT
There's some irony in this post coming so closely to your "minimum TTL" post.

What if the two minutes saved per day were divided into 4 blocks of 30 seconds
each, but the 30 seconds could come randomly and with high-demand, to interrupt
the flow of concentration on what might be a much more important job for the
person?

To me, the value of the "saves two minutes a day per person" is that it
prevents unnecessary interruption. If it's the sort of task that someone would
schedule to perform while, say, eating their lunch, then I agree with you that
the difference is pretty marginal.
re: Valuation of productivity measurments as cumulative minutes saved by employees -- do you buy this?By Devin Olson on 07/16/2007 at 09:49 AM EDT
@Nate:
I think this is something that comes with experience... both the cumulative
experience of the "expert" (regardless of the expert's profession), and the
experience of the "team members" who work with the expert.

Regarding Andrew's contractors: The two brothers are the experts, and they are
in their "zone" doing things that appear to non-members of the team as
non-work. I'm willing to bet that the subs who worked for them knew when (and
more importantly, when NOT) to interrupt them.

Or hitting closer to home, my wife (and I'm sure yours as well as Andrew's) can
tell when I'm "in the zone", and does her best to NOT interrupt me when I'm
there (lest she receive "the look"). The same thing holds true (to a lesser
extent -simply because I'm still the FNG) for my co-workers. They can tell
when I'm focused vs. when I'm available for interruption.

-Devin.
Its an iterative process for me.By Andrew Pollack on 07/16/2007 at 10:02 AM EDT
I know what you mean about starting with paper and white board.

I have a pad of paper and a set of uni-ball vision elite pens which come in a
plastic pouch set of 8 colors and have traveled with me to Tokyo, Munich,
London, Ireland, and most of the US.

Since most of what I consider the "heavy lifting" programming work doesn't
happen in Notes any more (most of anything I can do with Notes is more in the
category of tasks than creativity) I generally go back and forth.

The idea gets modeled on paper by starting with a features/functions/task
listing and then getting organized into an object model. That's tentative, but
helps me think. Then I look for the "hard stuff" meaning technical tricks I
don't already have established coding patterns for. That's when I bring up the
development tools (vs.NET 2005, Domino Designer, Eclipse, or a JOE in a linux
command prompt) as well as a browser window on a second monitor for research
and some of the books off my shelf.

That process goes back and forth until the pattern I'll use to build the new
"thing" becomes self evident. Then I pull out the valuable patterns from the
trash code and dump the rest in the trash.
re: Its an iterative process for me.By Albert on 07/10/2010 at 02:45 AM EDT
I largely have the same system. Makes you think and thus perform better on
projects..
You're right. I should qualify this post by suggesting that the savings is not interruptive in nature.By Andrew Pollack on 07/16/2007 at 09:56 AM EDT
I was thinking of something that happens at the beginning of the day rather
than something to distract in the middle.
re: Valuation of productivity measurments as cumulative minutes saved by employees -- do you buy this?By Bruce Perry on 07/16/2007 at 10:02 AM EDT
For developers, a focus on ways to eliminate (or delay) interruptions would
likely be more valuable than saving small blocks of time.