So far, this is the best Lotusphere I have ever attended. I don't say that lightly. I'll detail the key things in the OGS at the end because there's a lot of content and I don't want a few things I have to say first to get lost in it..... 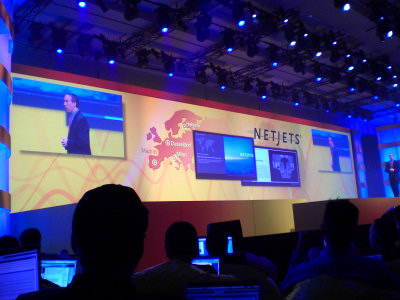 One year, I won a Beacon Award. One year I was a finalist for a Beacon and overflowed every single session I delivered. So far, this is a better Lotusphere for me than either of those.

First, let me say that the annual dinner for IBM that we (Penumbra) hold at Fulton's each year went very well and turned out to be just the sort of kick off that I like to have. I had the privilege of sitting and talking with Bob Picciano and was completely blown away by his intelligence and his sincerity. He's one of those rare people who is both brilliant and charismatic. I won't say humble, because I am quite sure he knows that he's operating on another level from most of us -- but he's not arrogant or course about that at all. Its comfortable on him, like something he's just known for a long time and isn't in question.

So, what's been so great so far?

1. Having a new General Manager of IBM Lotus who is not just a Notes guy because it sells well -- although even that would be step up. Bob is Notes guy in that his approach to solving customer problems emphasizes simple, elegant, functional approaches and eschews complexity and unnecessary cost. Bob Picciano thinks of the people who use his products as "Customers" and never as "Users". He said that the only two industries who call their customers "Users" are the computer industry and the illegal narcotics industry. He feels it is a term of contempt and won't let his people use it. Oh, and if that's not enough to make him a Notes guy, did you catch that his wife is currently employed as a developer of Lotus Notes applications? I suspect he'll have heard of the need for a LotusScript editor long before he took the position on this executive team.

2. Being treated as if I were important. This was a little weird for me, because I've repeatedly said that I don't think Bloggers should be treated as press. IBM included me in the short list of bloggers who are getting some very special treatment and more than a few perks this year. Taking advantage of them seemed a bit hypocritical at first. I spoke to someone I respect a great deal on both social and industry press issues about this and her comment was "You've said your piece, and its not your decision. They made the call, so you should take advantage of it." It's a bit like being told by your doctor that you need to eat more ice cream. Its pretty easy to be convinced. The result was that I got to watch the OGS from a comfy beanbag chair up front with power and network access (ok, the network failed, but I had my own anyway). It was great fun.

3. The small things -- For years we've been asking for access to the side doors at the Dolphin and Swan for users who aren't staying there. It can save a huge amount of walking many times a day. This year, when people checked in to many of the hotels around they were given keycards that work like room keys for guests of those hotels so they can go through the doors. It sounds small, but it has meaning.

4. Gab & I did our Security jumpstart twice on Sunday and it went very well.

5. BP106 - From IBM Lotus Notes Java Devloper to Lotus Notes 8 Plug-In Developer -- This session, delivered by Mikkel Heisterbert -- was tailor made for me. I've done no plug in development because despite knowing Java and knowing Notes, when it came to plug-in development I didn't know where to start or what was really feasible. I know the information is out there, but it takes time to go find it and figure it all out. Mikkel put together a session that was absolutely everything I needed to know to start building plug-ins immediately -- and not a single thing I didn't need. This was all signal, no noise and perfectly leveled for someone in my position. Another developer I talked to on the way out called it "three months of head banging frustration skipped over as a result of reading a dozen slides."

6. Ytria's tools. I'd never looked closely at these before. I like them ALOT. They're expensive though -- the full set will be a real stretch for me to consider buying. If you haven't seen them yet, go watch their two minute demo. I have the attention span of a gerbil on crack and it hooked and held me. I WANT THIS TOOLSET -- I just have to find a way to justify the cost now.

7. The Opening General Session -- didn't suck at all. I usually write a blog entry that rips the opening session. Year after year they've stepped on the lead, bored everyone to tears, and drained the life from the room. Not this year.

Blue Man Group opened up the OGS and did a fantastic job of it. They did a few songs including "Rock Concert Movement" and really had everyone in a great mood. Then Dan Akroyd came out and did maybe five minutes of incomprehensible chatter that was somehow mildly funny. He's clever and his timing is perfect, but he didn't really connect with us much.

The content of the OGS was very crisp this year -- instead of droning on and on about things until your eyes roll to the back of your head and you pray for the next segment, they actually blocked it out very well and kept energy up through all the speakers. Ok,I personally thought that the Quickr/Connections demo portion was too long, at least it was effective and interesting. They also had to do a few minutes on Portal -- long enough that I was afraid my heart would stop beating simply through the loss of will to live, but that's just me because I don't like the product. Netjets did a great job on their customer story as well. It was very compelling.

I thought I'd be really upset about not having Designer in the OGS at all. In the past they've given it very short shrift and it has annoyed me. Not doing it at all was actually better. I can see were it would drag the timing down and slow the session -- and there is so much to talk about you could never do it justice. People who want that information will go to Marueen's sessions and they'll get what they want and more.

Of the discussed points, here are some that are highlights -- to me at least:

Lotuslive is the new name for the SAAS offering that includes what was called "Bluehouse" and adds a lot more. They've partnered with Salesforce.com, skype, and others to come out with a pretty big offering. We'll see.

A Blackberry development toolkit will plug right into Designer, giving you a one-place application development tool. Quickr development will also come down this route. This is good news because it shows how extensible the new DDE client really is. We're starting -- finally -- to see the benefit of all the weight and complexity in the Eclipse framework.

The Foundaations platform moves forward, I think I understand that its to include a BES server now as well. This means an SMB could airdrop in one of these appliances and instantly provide some pretty complete infrastructure for a new business.

A comparison of Domino as a mail platform against Microsoft's platform is usually done on a number of seats per server basis or something else. This time we got some more interesting numbers. 40-60% savings is disk space, I/O activity, and CPU use. This is very helpful because many people are vitalizing their servers across VMWARE GSX environments where those numbers are much more meaningful than number of processors when predicting the impact on the environment it runs in.

IBM is going to directly support the OpenNTF effort with donated code and other resources.

If your company has SAP and you're not looking at Alloy (formerly called Atlantic) then you're a fool. Alloy gives your notes users a beautiful user interface right in the Notes client for working with SAP workflow applications. It does it at great cost savings over the much less functional Microsoft tie in "Duet". Alloy is going to save a ton of existing customers who may have been considering migration, and its going to sell a lot of new seats.

A demo of the BB Storm interacting with XPages and even SAP workflow really brings the point home about how much better RIM has been to work with compared to Apple who don't bother returning calls.

There's lots more, but those are the key things for me. What did you think?

There are  - loading -  comments....
re: Best. Lotusphere. Ever. By Dwight Wilbanks on 01/19/2009 at 04:37 PM EST
Do you think that at some point in the future Lotus symphony will support Lotus
123 format? Or at some point do you think that Lotus Notes will import rich
data Lotus Symphony?

It was absolutely jaw dropping-ly surprising that one side of the application
can't talk to the other side of the same application.
re: Best. Lotusphere. Ever. By Andrew Pollack on 01/21/2009 at 12:19 AM EST
I don't really think much about Lotus Symphathy.
re: Best. Lotusphere. Ever. By J■r■me Deniau on 01/20/2009 at 02:38 PM EST
You are completely right Andrew, for LotuSphere and even Ytria, if you do need
to modify tons of views or actionbars (not talking about scanEZ), they are top
notch!
re: Best. Lotusphere. Ever. By Charles Robinson on 01/20/2009 at 02:52 PM EST
VMware GSX doesn't exist. The choices are VMware ESX, which is the flagship
enterprise product, ESXi, which is targeted at embedded /OEM implementation,
and VMware Server, which is the free version that runs on top of a host OS
(Windows or Linux). So far what I have seen are mostly ESX and Server, with
ESXi being slower to catch on because it has to install on enterprise-grade
hardware anyway. Dell and HP both offer servers with ESXi preinstalled, I'm not
sure about IBM.

For the past year you have been highly critical of IBM and Lotus and outlined
specific failings. None of those have been addressed yet (at least publicly),
so it is curious that you are so positive all of a sudden.
re: Best. Lotusphere. Ever. By Andrew Pollack on 01/21/2009 at 12:22 AM EST
Ok, sorry. I meant ESX not GSX.

Well, most of what I'm upset with IBM about is being fixed -- and they're not
trying to jam more products I don't want down my throat instead of Notes and
Domino.

Life is far from perfect with them, but the signs are all good to me right now.
re: Best. Lotusphere. Ever. By Julian Woodward on 01/24/2009 at 05:31 AM EST
Charles, are you complaining about the fact that Andrew isn't complaining
enough? Is that some kind of meta-complaining? And if I complain about you
complaining about Andrew not complaining enough ... er ....
:-)