I tried out the new Blackberry Storm yesterday. Here's my review of it, and Verizon's pricing

Short answer: Looks good, going to it would means some sacrifice for me. 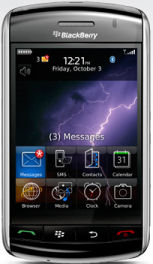 The Storm is Blackberry's current best swing at the rapid market share gain of the iPhone. Its a touch screen of a little different nature, but with all the blackberry goodness that you addicts love so much. Its also a dual mode phone, which includes a GSM SIM card in addition to its CDMA primary network. Unfortunately, according to Verizon it cannot be used in Europe on the GSM network as anything other than a phone. It looses its "Blackberry-ness" -- including connectivity to the BES server and its ability to browse the internet. At least that's what Verizon told me.

If it turns out to be true, its a pretty major disappointment. The phone is, of course, locked so you can't just put someone else's SIM card in it. Somehow I doubt cracking that protection will be as easily done as on the iPhone, given how RIM protects their workwork from duplicate BES keys.

Aside from that, to be interesting to me, it needed to meet a few key criteria.

1. The on-screen keyboard had to be easily typed on with good accuracy. It was pretty good. It was at least as fast to use as my Samsung's full "button" keyboard, and in fact switching between numbers, symbols, and alphabetical typing was easier. In fact, the few times my fat thumbs hit a wrong key, the Storm popped up the word it though I meant -- accurately and unobtrusively -- so that I could click on it instead of having to backspace. Generally speaking I was impressed. I suspect that this could be configured to act like a T9 style type ahead but I didn't look into it.

2. Decent web browser. Again, it was "good". It wasn't really quite good enough for me, but I understand that there are alternatives I can find from you crackberry addicts out there. This one did render html and css properly, but didn't handle javascript redirects or ajax at all. I'd need to be sure a better browser would work for me before I would be willing to buy it.

3. Decent telephone audio quality. Oddly, that's the one thing I couldn't get a read on in the store. If I move further, I'll make some serious test calls with it. One of the few things I don't like about my Samsung is that the audio quality is really bad.

4. The overall touch screen had to be responsive and full of touch-screeny goodness. From what I can tell, it was very good that way. Some of the gestures were less than immediately intuitive but I did get the feel of it enough to know that it could become comfortable.

That really leaves me with two concerns that I'll need to satisfy. Reliability -- which I'm told is currently poor, with Blackberry already promising a major update "soon", and use as a phone in terms of audio quality and the simple act of holding it and talking on it. For reliability I'm going to have to wait a few weeks and watch the commentary I think.

If I turn in one of the phones I have, I can get their $100 bucks off as part of a contract renewal. That means I'd only have to pay $100 for the phone. Then you have to pay for service. Aside from the use as a phone, which I'm already paying for on my Samsung phone, there is another charge I'll start adding on. Here's how it works:

Since I already have a card in my PC that gives me the EVDO Rev A service, I don't really need the extra $15 charge. If, however, I were to stop using the internal card on the laptop and instead settle for using the tethered Blackberry as my wireless modem I could keep my current cost of service exactly the same. If I keep the card, then owning the Blackberry Storm and using my own BES server will cost me an extra $45 a month -- and won't be something I can use in Europe for any practical purpose. I'll be better of there using my cheapo unlocked Nokia.

On the other hand, in return for the extra $45 a month, I get the benefits of push mail integration, a workable touch screen phone, and some good applications like SSH connectivity to my servers.

It is not going to be an easy decision.

There are  - loading -  comments....
re: I tried out the new Blackberry Storm yesterday. Here's my review of it, and Verizon's pricingBy Joerg Michael on 11/24/2008 at 01:31 AM EST
Yup, they really want your money once you want to use your own BES. Same thing
here in Germany. Why don't you take a look at the Nokia E71 and the upcoming
Lotus Traveler for Symbian. You get push mail without the extra carrier
charges.
I don't really get the cost difference.By Andrew Pollack on 11/24/2008 at 01:36 AM EST
Its really odd that it costs $15 a month more if you DON'T use Verizon's
blackberry connectivity. I have to guess it is one of two things:

a) Its a data charge, as the BES communication consumes some amount of their
network

b) RIM is charging the carriers for terminating the connectivity and Verzon is
passing it through.