It may not have been the most exciting, but from IBM’s perspective it may have been one of the most successful Lotusphere events in recent memory. From the Opening General Session right through to the last minute, IBM set the tone and topic more effectively and more in tune with customer demand than I’ve ever seen them do before. While the rest of the industry is talking excitedly about magic cloud computing solutions and social interactions like Facebook, IBM asks the question “How can we use this for business?”

The opening general session was better organized this year – the only mistake being that the panel discussions went on far too long. I’ve been saying for years that the best place for exciting demos is at the end of the session so that people can leave with some excitement and for the first time that’s the way it was done. While paying remote homage to long time demo man Ron Sebastian, a new star was born to the Demo stage. Brian Cheng ( aka @quasifu ) was outstanding. He poured out excitement without treating the audience like children, got the job done quickly, and essentially made the geeks happy. While I agree with some that it was hard to tell exactly which product was being shown at different times, I don’t believe that mattered. Brian showed us cool things we could do with the new software if only we’d go to the follow-up sessions and learn more about it. There was no Apple-style “oooohhh” moment on stage, but the message was consistent and well told. IBM is leading the industry in social collaborative software for business.

Traveler – Who knew this would be such a game changer?

Traveler was the big high spot for me in terms of products this week. What I came away with after talking with other Penumbra members on the partner side and with customers over lunch, is that Traveler is not just compelling to us geeks with our gadget mania. CxO level executives and even board members from major companies are absolutely in love with Traveler. Internal test server allocation is being snapped up as fast as it can be allocated and the demand for full support is incredible. I’ve even heard of more than one company that has reversed its decision to migrate away from the Lotus products as a result, and in at least one company the excitement over Traveler has spurred renewed interest and development in other Lotus products including Connections and Sametime. Clearly, Traveler is a game changer in terms of refreshing the brand’s musty old image and giving the Lotus name a shiny new appeal. On top of that, Traveler is really helping back up IBM’s claim to be leading the move to realistically tie mobile computing platforms to a business collaboration back end at reasonable cost.

I’ll write more on Vulcan later, but I’ll say for now that although it isn’t what I thought it would be it is going to make tying all the IBM browser based products together much easier – and will make them far easier to integrate with your own application development plans for the intranet space.

Lotusphere for me this year was great fun -- with the exception of having to deal with an over eager new IBM lawyer who seems to be so busy trying to impress his new management that he’s missed the point of the work he’s doing entirely. I’ll talk more about that later when I decide just how far to push back.

My session with Gab Davis was much more fun this year. Gab and I knew we had to re-organize the content and take a different approach, and her idea for how to do it proved extremely successful. Your feedback from the session was gratifying and we’ll likely expand on that idea in the future. My other two sessions were also very well received and I’ve been flattered by your feedback.

After hours was as fun as ever. I’m impressed by how many of my peers have the talent to perform at Kimono’s and actually sound so good. One of these years I’ll get up and do something really badly just to get you to stop pushing me to try. Believe me, once it happens you’ll regret ever asking. The party on Wednesday night was one of the best I can recall. Food lines were short, the park was spectacular, and I haven’t spoken to anyone that didn’t have a good time. I may go into a diabetic coma if I ever have another of Universal’s take on “Butter Beer”, but at least I’ll enjoy the trip. 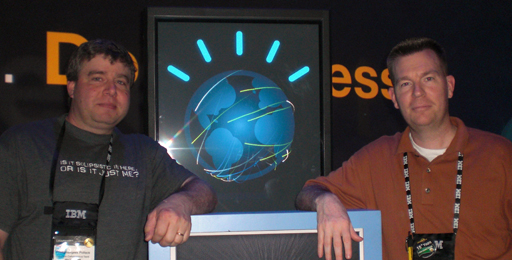 Andrew Pollack and Chris Miller in front of Watson's "Face" screen
How many ways can you say “Awesome”? On February 14th IBM is scheduled to bring its Watson supercomputing platform to play on the long running intellectual game show “Jeopardy” against two former champions ( more info ) . To do this, Watson has to be able to interpret the same question text and category names – including the allusions, puns, wordplay, and quirks of language – which the other contestants do. Nothing is altered or simplified for the machine, though a text interface is used to feed the question rather than natural speech recognition. During the match, Watson will have no connections to any external data sources. Only the processing power and stored library contained within its own systems will be used. In the demonstration match, Watson handily beat the Lotusphere attendee players who had been chosen earlier. I’m told there was a kind of mini-match played to pick the best players to run against Watson.

The “Front End” that we see of Watson is a display panel with a sort of “face like” illustration of moving lights and working circles and rings. It’s very futuristic, but clearly also designed to be somewhat friendly. Obviously that isn’t the computer itself – which is contained in several racks in a data center configuration – but I suspect it is the image that will go down in the history books. Make no mistake, win or lose people will be talking about the Jeopardy episode for a very long time. I was personally trilled to be able to have my picture taken standing next to Watson’s “Face” screen after the session. I was also very pleased that IBM placed enough priority on the Lotus product line to be willing to show off Watson before this very important public debut.