What about the children?

Of course, it's not just me that's been busy the last two months. Caitlin has finished 2nd grade has both parents to herself for three weeks while Ari and Coryn are at an overnight camp. Its one of those classic New England summer camps that I thought only existed in movies. Barb and Caitlin are going up on Saturday to see them and to wish Coryn a happy birthday -- she's 12. I can't go as it is my turn to be the "weekend duty officer" for Cumberland and there is a good chance it will be active around here. Falmouth, the next town over, is hosting half of the games for the Northeast Regional Finals in youth soccer. They'll have 128 or so teams from out of state all trying for a spots at the nationals in Texas. This tournament is usually in Virginia, so its a big deal. Its also between 15 and 20 thousand people expected in a town that is about that size.

Speaking of Soccer, Ari's team took 3rd in their age bracket up in Burlington Vermont in her last set of games for this season. She played well, though a bit less than she'd have liked as her knees are sore from the long season. The team that beat them went on to win, beating the second place team by the same margin. It was mostly a fun weekend, with Ari and I driving up to Vermont and staying with the team at the only hotel remaining by the time we'd been accepted into the tournament -- a Motel 6.

Coryn's team also had a tournament in nearby Brunswick the same weekend. They didn't do as well, but Coryn is getting better and playing goal keeper more and more. We're going to look for some specific coaching in that as it is a pretty specialized skill. What's been giving her the confidence and reaction timing to play that position is her karate. She's getting very good, and has joined the "SWAT" at her karate school. The SWAT is a demo team that does some extra practice and takes on additional skills. They perform at the graduations and other events.

Here is a movie of Coryn doing her demonstration of a form at the recent graduation where she was made a "purple" belt. http://www.thenorth.com/CORYNKARATE.MOV .

Finally, here are some pictures of Ari and Caitlin in the pool, relaxing into the summer..... 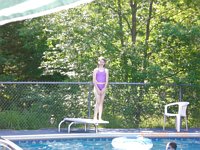 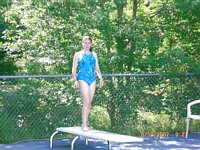 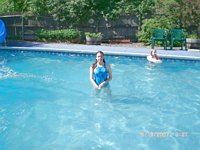 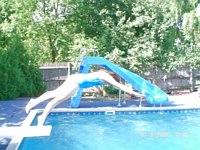 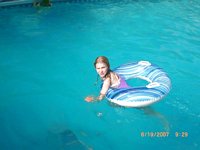 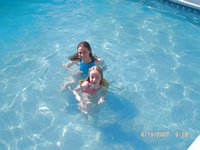 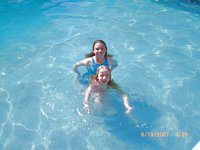 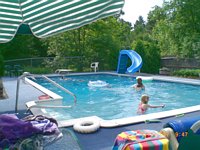 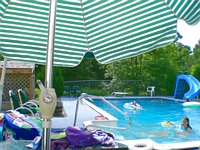 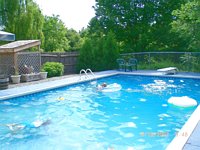