What ever happened to Lotus/IBM and their big Second Life Plans? Lets take a look. It isn't pretty.

I'm in the second Opening General Session. As I had nothing better to do while Bob Costas was speaking to the 20% of the room who both know who he is and also care, I decided to pop in on Second Life and see who was watching from the Lotus venue on IBM's island. Remember that from last year? 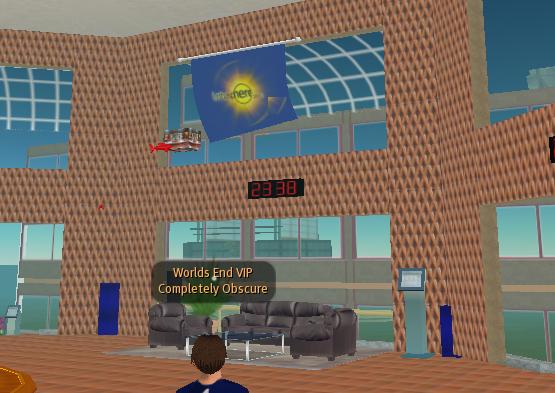 Well, after downloading the updates to Second Life, I 'flew' over to the Lotus venue from last year. It was nearly empty. There was one person outside -- not from IBM of course, and fast asleep. An abandoned avatar. I went into the pseudo-dolphin lobby and it welcomed me. Banners flying on the walls proclaimed Lotusphere 2007. Otherwise, it was abandoned and unchanged.

It was hard to take it seriously in the first place.

The W.O.W. players must have moved on from their jobs at Lotus since 2007.
re: What ever happened to Lotus/IBM and their big Second Life Plans? Lets take a look. It isn't pretty.By Ray Bilyk on 01/21/2008 at 12:40 PM EST
I was there for the first Opening Session. There were about 4 or 5 of us...
wandering aimlessly, looking for something current. According to Per Henrik
Lausten, an IT Architect at IBM Global Business Services in Holland (
http://per.lausten.dk/blog/2008/01/lotusphere-2008-in-second-life.html ),
IBM/Lotus was going to make an appearance. I guess he didn't get the memo that
they've moved on to greener pastures. Too bad...
re: What ever happened to Lotus/IBM and their big Second Life Plans? Lets take a look. It isn't pretty.By Jo Grant on 01/22/2008 at 11:44 AM EST
It's a question of priorities. We've had some successes in Second Life. Several
are chronicled in my blog. But I was on paternity leave this year in the ramp
up and not available as the "resident expert".
The branding got updated yesterday. The first chance I've had to breathe in a
while. My sojourn to Lotusphere got cut short by a family emergency so I'm back
already. But I'm spending most of the rest of the time in virtual Lotusphere.
:-) There's been a few people through. Some interesting chats. I've offered to
give a talk later in the week and asked people to vote on the topic in my blog.
So you are a bit harsh in what you are saying. But it's a blog and that's how
blogs get hits. Doomsaying and Second Life seem to go hand in hand anyway. :-)
Enjoy Lotusphere! I'm jealous. Virtual Lotusphere is as close as I'm going to
get this year...
That doesn't fly, and you know it.By Andrew Pollack on 01/22/2008 at 12:42 PM EST
First of all, I am not ever "harsh" just to get hits. Anyone who knows me
surely knows better. I'm just harsh. ;-)

As far as unduly harsh in my assessment? As a CUSTOMER, I went to the space
DURING the opening general session. Nothing I said was made up. It was
abandoned. The banners were a year out of date. There was NO indication that
ANYTHING was going on.

If this is because you personally were unavailable -- well, how sad is that?
IBM supposedly commits to something but because one individual is away the
entire marketing experience is ignored for months leading up to their biggest
event?

I'll stand by what I said.
No one promised you a rose gardenBy Jo Grant on 01/22/2008 at 02:14 PM EST
I don't think there were any announced plans to have anything in Second Life
this year at all. So when you lead implying "big Second Life Plans" that's
overstating things just a bit.
There have been changes since last year. Some are easy to overlook, like the
automatic conversation translator in the corner. Others are harder to miss,
like the huge building Lotus Brazil has put up.
Second Life is an interesting experiment and continues to be so. I'd love to
hold a "Lotusphere Comes to Second Life". But with the current limitations on
the number of simultaneous people present, it wouldn't be a wise investment.
Given that, it's mostly a hobby for those who are interested. Thus, if I was
around more, there would be more. But there has been no public statement about
Lotus opening a branch in Second Life. So it's not really fair to complain.
It's like if I went to an old domain name of yours and being upset because it
wasn't there anymore.
As Second Life gets better at delivering return, you'll probably see better
investment from IBM and others.
Are you serious?By Andrew Pollack on 01/22/2008 at 03:29 PM EST
Are you seriously comparing the IBM/Lotus presence so touted and marketed last
year as to have been shown in the opening general session to the equivalent of
an "old domain" for a marketing program that no longer exists?

IBM/Lotus is either serious about the space or they are not. Having it now
relegated to the status of a hobby for those still interested is an extremely
telling difference from the attitude last year.

As I recall, thousands of employees of IBM were at one time required to go
through a training and tour of this space. That was less than a year ago.

Personally, I tried Second Life; spent enough time there to design some things
and get to know some people; and have largely abandoned it.
Where did you get this?By Jo Grant on 01/22/2008 at 05:38 PM EST
I'm not sure where you got that from. At no point were "thousands" of IBM
employees required to go through a training and tour of the Lotusphere build.
I think you are confusing IBM's involved and Lotus' involvement. There are
thousands of IBMers involved in Second Life. (6000 registered names) They are
involved in all sorts of capacities. Many of them are at the hobby level. But
they don't own land. If you cruise around the IBM islands you will see projects
form all sorts of groups on all sorts of topics. That will give you an overview
of what IBM is doing in Second Life.
I write a blog about "return on investment in virtual worlds". With the current
state of maturity it really doesn't make a lot of sense for many business
vectors. But it does for others. If it doesn't work for you, it doesn't work
for you. Don't use it. But that doesn't mean it doesn't work for other people.
I've tried different things out with it for work with varying success. The
things that didn't work, I didn't do again. The things that had some success, I
work to refine. It's a new medium and that requires a lot of experimentation to
use successfully. But completely writing it off is short sighted.
re: Where did you get this?By Alan Bell on 01/23/2008 at 03:59 PM EST
I am not at Lotusphere this year. I logged on to Second Life for the first time
in 11 months expecting to find the schedule for the streaming of the OGS at
least. Last year there were loads of Lotusphere Architects busily moving stuff
about, this year nobody, and no particular changes to the rotunda (nobody has
even repainted the fish). Bit of a letdown, but as you point out there was
nothing to suggest there would be changes, I just assumed it was going to
become a regular Lotusphere thing.
Yes, we did mistake IBM for Lotus. We have been told to do so for the last 12
years. At last we have managed to merge the two in our heads and it turns out
we got it wrong.
re: Where did you get this?By Paul Gagnon on 01/24/2008 at 10:42 PM EST
speaking of shelfware, was there any mention of free Quikr Personal edition
that was announced on stage by Alister at the OGS for LS2007?