Another Storm, Another Fire, & Driving a Bus in the Snow

Some of you who've worked with me have commented that I tend to be very quick to change direction if things aren't going the way I'd planned. I don't marry an idea. I try hard to know when its time to go in another direction. Last night's events are a case in point as to why that's not a bad way to work.

This has been a heck of a December for snowfall. I don't think we've seen the front yard uncovered since the beginning. We got another 8 inches of very cold, very dry snow yesterday which was then covered by a brief period of sleet and maybe a few seconds of freezing rain to give it a little bit of crust.

With conditions as bad as they were (blowing snow and temperatures around 10 degrees F ( about -12 C) we did staff the station from noon on. I got there just before 1300 and found the guys watching the Patriots game on the small TV in the day room with their backs to the large projector screen and its ceiling mounted projector. I expected this, and had brought a bag of wires, cables, speakers, and so on. Within 15 minutes the chairs had been turned and we were now watching on the 8 foot screen.

Of course, once we'd staffed the station, there were no calls. At around 18:00 we cooked dinner for the town plow crews and ourselves -- which of course meant that a call came in for an alarm sounding on Main Street. 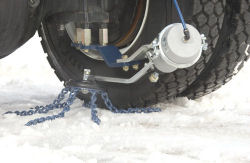 I took a crew with Ladder 7. It turned out to be nothing, but I did get to play with the "On-Spot" chains. These are really great. You flip a switch on the dash console, and they deploy under the rear wheels. They're timed by simply using friction with the tire itself as a drive mechanism and so work perfectly well in forward and reverse.

By 20:00 we'd cleaned up and gone home, only to get called out at about 23:30 for a carbon monoxide alarm call. Here's where it gets interesting.

A C.O. call means an engine company and a ladder company. In this case, Engine 3 and Ladder 7. A few minutes later a call came in for a fully involved barn fire in the next town over. They were calling for our RIT team so I headed for the station. When I got there, we had enough crew already for a RIT response, so I opted to stay behind in case they needed another unit. Ladder 7 had not gotten out yet for the C.O. call as it was short staffed, so I radioed to the scene command at the C.O. call that I was available with the Ladder if they needed ventilation, but would likely also be needed either with Engine 1 or Ladder 7 in Yarmouth. About ten minutes later two more people showed up for crew to stand by.

Yarmouth called in looking for our "REHAB" unit. This is an old school bus that's been painted red and outfitted with air storage and air tank filling capability as well as some bench seats and a good strong heater. I had no intention of driving it in this kind of snow, however. Well, nobody else showed up to drive it so reluctantly I agreed to do it.

The Rehab bus was parked behind the station, and to get it out we also had to get the snow mobile trailer out of the way. We backed Jake's truck in, but his hitch was so high we could not use it, so the job fell to my little Pacifica. I backed in and we lowered the trailer onto the hitch. Keep in mind, we're talking about 8" of snow this trailer was in. To my surprise, I was able to pull out the trailer and a few minutes later we had the bus out and running.

The bus does not have On-Spot chains. It also does not have dashboard lights but I don't think speeding was likely to be an issue anyway. The several miles of snow and ice covered roads were a real challenge in an old school bus that I'd driven exactly one other time. We did find the edge of the road a couple of times, but eventually got there safely. We warmed some people up and we helped break down some hose line, and were finally released from the scene at around 0330. At 0400 we were back at Central Station. I pull the bus straight into the parking lot and shut it off, then sent the young guys home.

That's why it was 0400 and I was alone at the station when I realized the weight of the snow mobile trailer had lowered my car enough that I could not deploy the trailer's jack to get it off my hitch. There wasn't enough clearance. It was looking like the choices were to wake someone up, sleep at the station, or take the snowmobile trailer home. 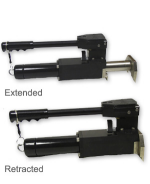 I did find an old bottle jack in the back of the station. It didn't work. At a fire station, we have a lot of equipment that can be used to lift things. I ended up using some cribbing (wood blocks) and a "Hydra-Ram" to lift the trailer tongue enough to deploy the jack and get my car free.

By 0430 when I'd got the car free and put the hand tools away, I was officially "DONE". I left the trailer and bus right in the parking lot rather than try to pack them into snow-filled places behind the station. Things were clearly not working out well and I could see a pattern of downward spiral developing. Best to leave it for morning.

I did get home by around 0440, and then had to snow-blow my driveway so Barb could get out in the morning. At 0445 the snow blower ran out of fuel. Fortunately, I keep plenty on hand so by 0500 had finished up. I had something to eat and climbed into bed at 0530. At 0700 I got up to see Caitlin off to school as Barb took the other two in. Then I went back to bed.

I slept quite soundly until noon.

There are  - loading -  comments....
re: Another Storm, Another Fire, & Driving a Bus in the SnowBy Timothy Briley on 12/17/2007 at 04:12 PM EST
Greetings from Florida.
And to think I'm annoyed because it will be too cold to play tennis tonight.