Say what you may want to about Ray Nagin, as long as you call him the winner. 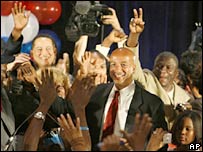 The guy may have sounded pretty bad on the news. He may have said some things most of us find pretty ridiculous, but clearly he's a hell of a politician. It doesn't even matter if any of it was his fault. How else could the man right up front in charge of his city when it literally became uninhabitable, the man with the plan ....that left hundreds stranded on rooftops and thousands in a worn out stadium with inadequate food, water, power, and sanitation, the man who left hundreds at what was supposed to have been an evacuation site but was abandoned -- how else could that man win a landslide victory and return to the same post less than a year later? You have to hand it to this guy, that's one hell of a comeback.
There are  - loading -  comments....
My own thoughts on this are...By Chris Whisonant on 05/23/2006 at 07:59 AM EDT
I couldn't believe they would re-elect him. My goodness!! It's further proof
that to live in NO you have to be about stupid! :) Why would people move back
to that bowl that was flooded and will again someday? It was a close race,
though, so there may be hope...
Does not surprise me.By Dwight Wilbanks on 05/29/2006 at 11:31 PM EDT
After president George W Bush was re-elected, I lost my ability to be surprised
at the wisdom of the masses.
I was going to bite my tongue on this one, but what the heck.By Craig Wiseman on 05/30/2006 at 10:30 AM EDT
First of all, it was thousands stranded on roof tops and TENS of thousands
stranded in a (storm damaged - not worn out) stadium.

If you really want to know how pathetically Nagin handled the run up to Katrina
and the aftermath, you need to read "The Great Deluge : Hurricane Katrina, New
Orleans, and the Mississippi Gulf Coast" (
http://www.amazon.com/exec/obidos/tg/detail/-/0061124230/qid=1148995760/sr=2-1/r
ef=pd_bbs_b_2_1/104-4902157-2812741?v=glance&s=books )
by Douglas Brinkley, Tulane professor & Stephen Ambrose protege. Simple,
straightforward reading that makes the blood boil (at least mine) at the
compounded stupidity at the local, state, and national levels. It pays special
and deserved attention to what Nagin didn't do prior to the storm (hurricane
plan? We don't need no stinkin' hurricane plan!).
There's a reason that both Nero and Nagin start with an N, although I'm pretty
sure that Nagin doesn't play a fiddle....

Secondly, his opponent in the run off was Mitch Landrieu, who is a poster child
for the definition of "part of the establishment" and was taking large/huge
sums of money and other support from the DNC and other out of state groups. You
might wonder why the DNC would want to get rid of a Democratic mayor? Although
you'd think it 100% because of Nagin's performance during & after Katrina, the
reality is that Nagin doesn't play well with liberal Democrats, in fact he
endorsed Bobby Jindal (R) in the last governor's race, which in retrospect was
a very wise recommendation.

So it came down to voting for the man that lots of people from out of state
determined should be the mayor, or re-electing someone who had been doing a
pretty good job, but blew it over Katrina.
Neither man would be a real, refreshing change (the DNC saw to that by pouring
so much money into Landrieu's campaign that the real reformers couldn't
compete), and in fact, Landrieu could be seen as a big step backwards in terms
of fighting corruption and trying to break the mold going forward.

Oh, and Chris Matthews SUCKs. He needs to learn that 'moderating a debate'
doesn't mean making it about Chris Matthews. I'm not sure if you watched that,
but it got to the point where Nagin & Landrieu were together defending New
Orleans from Chris Matthews. Just sad, and not helpful in making a decision.

(ahhh. that feels better!)
In talking to some friends in NOLABy Jon Johnston on 05/31/2006 at 11:39 AM EDT
a couple of them stated that they'd felt that Nagin was doing a decent job of
cleaning up some of the corruption in NOLA before the storm hit, so they voted
for him afterwards, and for some of the reasons you state, Greg.

Sometimes it is about choices. Even after the last two years, I'd still vote
for Bush over Kerry again. Kerry finally made up his mind that the Iraq war was
a bad idea in November 2005. What a decision maker.

What I do find about amazing about Katrina is that the media has never gone
back and recanted or apologized for the reporting they did. If hyperbole were
an energy source, the nation would be oil-independent.
hard not to comment there...By Andrew Pollack on 05/31/2006 at 12:09 PM EDT
While I believe there is little inspired in Kerry's politics over the last few years, I cannot agree with you that the ability to make snap decisions on poor information and then the personality to fight for those decisions well past when they no longer make sense is a benefit over the slower process and sometimes back and forth nature of a person willing rethink a position.

With Bush Jr. what you have is the exact opposite of Jimmy Carter. Carter, a brilliant and honest man was unable or unwilling to make morally ambiguous decisions. For him, the perfect became the enemy of the good. Bush, on the other hand, seems to believe his decisions are inspired divinely and thus require no further or future examination. He has been called "Messianic" in his attitude toward Iran, and had his mind made up about invading Iraq long before 9/11.

Our country has suffered setbacks under both men, and I wouldn't want to have to pick either again -- however when it comes to killing people, I would prefer those decisions to be harder to make and more quickly reconsidered.

Of the two, I prefer Kerry to Bush Jr., Bush Sr. to either, and either Clinton or Reagan (as he was in his first term) to any of the above. Different as they are, both were better for the country.

Looking forward, I've always respected McCain though he seems to have caved his positions entirely as he makes his new run and that saddens me. Mitchel would be excellent but won't run. Senator Snow (R. Maine) would also be excellent but isn't on anyone's radar. On the Democratic side, its hard to spot a good choice. A few years on, I hope Barak Obama will be as good a candidate as he was a speaker at the convention.
hmmm.By Craig Wiseman on 05/31/2006 at 01:05 PM EDT
I think you've guaranteed that the NSA will be listening to your phone calls,
you radical fellow. Don't worry about the strange clicking noises in the
background.