Images not showing up from your Web Applications? I spent hours tracking this down...

I've been working on an application for a client, and needed to store file resources both on documents and as design elements (file resources). For some reason, they simply weren't showing up on the web browser when viewed as part of any page.

* The images showed up when you would put the URL directly into the browser to view the image itself.

* The images showed up when you put the same code and image -- the same document -- in any other databases.

* The "Firebug" debugger for Firefox showed the image reference in the code properly -- but it showed an odd CSS tag. Firefox was adding a tag to make the image display and visibility tags both hidden/invisible.

To make the debugging even more fun, I'm using pre-beta "Code Drop" software to do this design work, so kept having to check to see if the problem was a bug in my development software. It wasn't.

It took me hours to figure this out. It turns out that the extremely popular "Adblock Plus" plug in includes in its default filterset, a filter that essentially kills any images on any site that includes "spons" in the file name path. In my case, the application file name was "/sipspons.nsf/" so by default Adblock was hiding the images. It did this even when the URL of the page itself I was on actually matched and was in the same path. 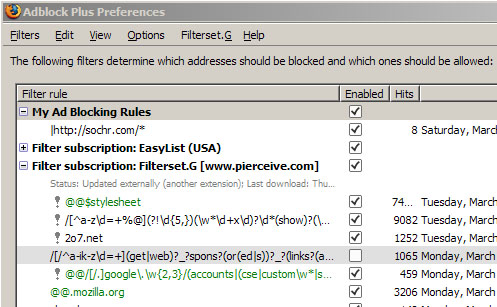 Although turning this off worked fine for me (as shown above), I have to assume many other people use this filter set and so I'll have to rename the application file name an avoid using that string sequence so users don't run into the problem.

You may want to watch out for it as well.