Obama in a landslide -- while most media claim its a close race, in the actual EC votes that count, it isn't at all.

One of the most unbiased, reliable, and clearly presented sites is FiveThirtyEight.com. That site combines all the polls and produces actual data you can read and interpret for yourself. They don't make predictions with it. They show you where things stand, and what the trend has been.

As you can see from this image, the way the Electoral College plays out, this election is in all likelihood going to go Obama in a landslide of epic proportions. 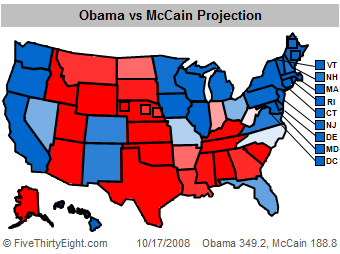 Why does the media want to show you stats that make it seem closer than it is? Easy. It makes for better television, sells more ads, and increases revenue.

Why do we use the Electoral College anyway?

I know this bugs some people. This mythical idea of the "Popular" vote having nothing to do with the outcome sounds irksome. There are good reasons for it though. Most simply put, power tends to concentrate. If it were not for the electoral college system, rural states would have little or no say in elections on the national scale. The ideas, beliefs, and priorities of big city populations are often very different from those of rural voters. Yes, in a way that means your individual vote in California counts less than mine in Maine -- in terms of as a percentage of its influence on the overall outcome. The question you have to ask is this: Is what's good for the country as a whole, more important? When states had more individual power to govern locally, it was absolutely the case that local votes were more important to most people. Today that may not be the case.

Still, it remains my opinion that limiting the ability for power to concentrate in any one location or group is a good thing. In Maine, we split our electoral votes between out congressional districts. This keeps Maine's E.C. votes important, but gives better representation of the two very different parts of our state. I think this trend will continue.

There are  - loading -  comments....
re: Obama in a landslide -- while most media claim its a close race, in the actual EC votes that count, it isn't at all.By Bob Balaban on 10/18/2008 at 01:13 PM EDT
If the Electoral College is undemocratic (which it is, and was meant to be by
the writers of the Constitution, as they didn't really trust the population as
a whole -- maybe they were on to something?), then so is the Senate.

Maybe we should get rid of both...
Slight clarificationBy Tim Tripcony on 10/18/2008 at 05:52 PM EDT
FiveThirtyEight technically does make predictions with their data: the
"Electoral Vote Distribution" graph displays the results of the massive number
of simulations that they've run using all recent poll data. Simply put, their
data suggests an extreme likelihood that Obama will win with roughly a 380/155
EV split - as you said, a landslide. Electoral-vote.com's current projection
(which ignores all data from partisan pollsters) is 349/171/18 (reflecting ties
in ND and NC).

My current personal projection is 401/137: all 6 states that E-V lists as tied
or "leans Republican" possess one or more of the following attributes:
- a comparatively small population
- an early voting period (and, in some cases, a "register and vote" one-step
early voting option)
- a concentration of population in one or more large cities
- a shift in party identification in recent years
- a comparatively high youth/student population

Each of the above attributes would exaggerate the effect of an "enthusiasm
gap": here in Georgia, for example, we've seen massive early voter turnout,
and, while Georgia does not register voters by party, the majority of early
voters thus far live in districts that have tended to vote Democratic in
previous elections, and/or belong to demographics statistically likely to vote
Democratic. In addition, nearly one third of all 18-24 year olds today have no
landline, and are therefore underrepresented in nearly all available polling
data. While conventional wisdom is that young people do not vote, the youth
enthusiasm bias toward Obama is undeniable, and will likely result in
unprecedented turnout in that demographic, primarily favoring him. In short,
anything that makes voting easier or more convenient - or seem more urgent - is
likely to result in more Democratic votes.