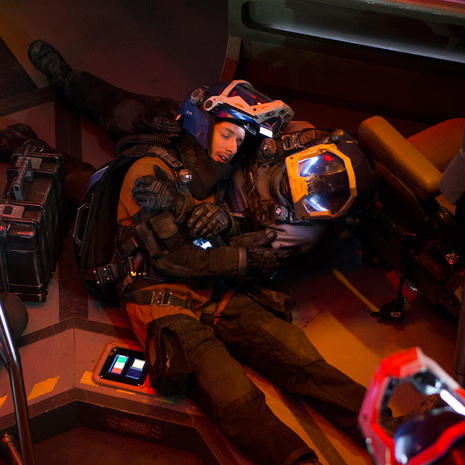 “The Expanse” is a new science fiction series being broadcast on the Syfy channel this winter. It’s closely based on a series of books by author James S. A. Corey beginning with “Leviathan Wakes”. There are 5 books in the “Expanse” series so far. If you’re a fan of the novels you’ll appreciate how closely the books are followed.

TIP: The first five episodes are already available on Syfy.com. If you’re having trouble getting into the characters and plot, use those to get up to speed.

The worlds created for The Expanse show a gritty, often cruel, always dangerous blue collar picture of living and working in space, on asteroids, and on the moons of other planets. In this world, historic themes are revisited with Earth and Mars the major powers and the outer world of the asteroid belt and outer planets playing the role of far flung colonies stretching for their own local power and control. As the series opens, war seems to be just on the horizon.

Syfy has pulled out all the stops for The Expanse. This is no low-budget set piece drama. The effects and filming are beautiful and attention is paid wherever possible to the strange physics of living in a place where “up” and “down” can change in an instant and the forces of motion or the harsh vacuum can injure or kill without warning. The deadly nature of the environment is demonstrated vividly in the fourth episode.

If there is a fault in this adaptation, it may be that a single one our episode may not be enough time to dive in and understand what’s going on in this complex world. There are ten main characters in three very different locations and in the first few episodes it’s not clear what ties them together or just who the series will ultimately follow. My hope is that people will stick with it because the plot line of the novel series goes in a surprising direction that should be fantastic to watch unfold on television. The first five episodes are already available on the Syfy channel. If you’re having trouble getting into the characters and plot, use those to get up to speed.

There are  - loading -  comments....
re: Fantastic new series on Syfy called u201CThe Expanseu201D u2013 for people who love traditional science fictionBy Timothy Briley on 12/30/2015 at 01:25 PM EST
I've listened to all five books via audible.com. As a group they are quite
addictive.

I've seen the first three episodes on syfy. To me, the pace is a bit slow. That
said, the production is first rate, deserving to be watched in your home
theater or with a decent sound system if you have one.

There is an android app for the show:

Thanks for the write-up Andrew!
re: Fantastic new series on Syfy called u201CThe Expanseu201D u2013 for people who love traditional science fictionBy Bob Balaban on 12/30/2015 at 02:29 PM EST
Just finishing up the first book in the series, glad to hear the tv version
isn't a waste of time. Thanks for the headzup!